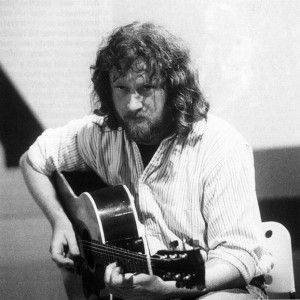 In the mid sixties my guitar idol was Davey Graham. Davey had an LP out called 'The Guitar Player' and he was holding a Gibson on the cover. I heard through the grapevine that an American serviceman on an airbase had one for sale and I had to have it. It was a J-50, nearly the same as Davey's and that was it for the old Scarth - musical considerations overruled by blind fanaticism. I found out later that Davey wasn't playing his by choice, he had owned a very nice Martin, gone to a party and come away with the Gibson, possibly without realising it! However, for me, it was a transformation. From 'Another Monday' right through into Pentangle it did the job - both acoustic and amplified. The J-50 has lasted well, only one major repair as I recall. The back was smashed, courtesy of an airline - guitars into Airlines do not go as I've learned to my cost over the years. It is now resting down in the south of France in the care of my old friend Remy Froissart.

Trying to turn an acoustic guitar into an electric guitar only works in a limited way - feedback is the main problem, but it is possible to get a good and rather individual sound. When Pentangle started to play in bigger venues the DeArmond set-up proved to be impracticable and I began using a semi-acoustic Gibson 335 - one of the old dot necks. It was a very nice guitar, good for fingerstyle as well as lead lines. At the height of Pentangle's popularity, someone in the management had the idea of billing us as an 'all acoustic ' band. Why? I don't know, since I was using the same type of guitar that Freddie King was renowned for. The 335 began making appearances on my own recordings, mainly for overdubs but also solo for a Bach Saraband on 'The Lady and the Unicorn'. 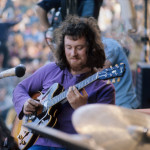 The 335 had a relatively short run. It was stolen out of the equipment van in Liverpool - a dependable place for getting separated from your gear in the late sixties. I was sickened, but bucked up enough to look for another - of course, by then, dot-neck Gibsons had become 'vintage' collectibles and that was that.

The J-50 was my main guitar on the solo Transatlantic records up to 'The Hermit', by which time it was ready for a re-fret and a rest. The recording studio can be a cruel judge of things that go unnoticed on the road.I picked up a Guild D-55 which I liked very much. It was already played-in, (another point in favour of a used instrument), which meant that I didn't have to wait to hear how it was going to open up. A few modifications took place, like taking the varnish off the table and slimming the neck down slightly to play along the length of the fingerboard easily and that was it. I used the Guild on 'The Black Balloon' and for touring and recording with Stefan Grossman.

In 2010 the Martin Company honoured me by bringing out my own signature model. It's a gem. The specs sheet tells a lot, but not all. The playability and sound are in the hyperbole class. I'm one lucky plunker.